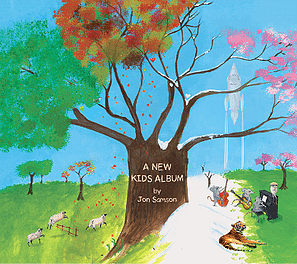 Award-winning artist and music therapist Jon Samson offers his third self produced kids album for the child in all of us. With a mix of original songs and re-imagined classics, A New Kids Album is designed to stimulate imagination and facilitate creativity and expression. Featuring drummer Marty Beller of “They Might Be Giants” and guest vocals by Vered, Joanie Leeds, and many kids!

Why we like it: Samson finds a fresh way to familiar tunes like “Mockingbird” and “Humpty Dumpty” as well as cleverly mashing many fairy tales together on “Imaginationology.” While some songs here are for preschool set, others are aimed for older kids. There is a playfulness to his poppy originals, such as “Silence Is All The Music I Need” and “Clean It Up,” that makes this CD a pleasure to listen to.

Suggested Retail: $$15 For Ages: Fun for the entire family www.cocreativemusic.com
Nappa Awards Winner 2015 Bronze
Share this...
Don’t Miss Out On The Fun
Sign up for our ENews and be the first to know the latest on toys & family must-haves, giveaways & gift and play ideas!
Follow Us On Instagram #PlayLearnConnect
Twinkle, twinkle, you're a star, how I love how ki