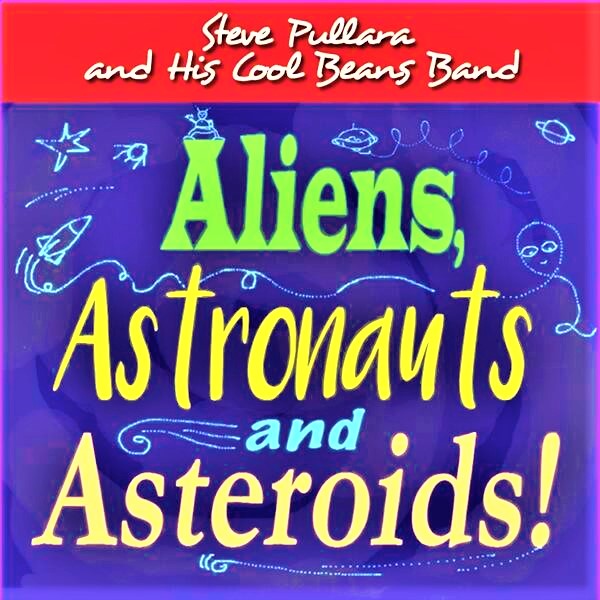 Travel through outer space musically in your own orbits with Aliens, Astronauts and Asteroids! by Steve Pullara and His Cool Beans Band! This fun and musical adventure will have you dancing through the galaxies and spinning like a satellite. Steve with his Cool Beans Band has invited some talented peers onto this album:Trevor Sewell, Twinkle Time and the fun harmonies of the popular Smith Sisters and the Sunday Drivers. Your countdown begins now at T- minus10, 9, 8, 7, 6, 5, 4, 3,2, 1 blast off with these eclectic space tunes!

“When we last left Steve Pullara, he was dealing quite hilariously with “Alien Babies From Outer Space” (a single he released in 2021). Pullara and his Cool Beans Band have returned now with more music, and it seems like they spent the last year with their heads in the sky because this album’s 14 cleverly conceived tunes (which includes “Alien Babies”) all revolve around outer space. “The Supernova Bossa Nova,” as the great title suggests, pairs an explanation of a supernova to a Bossa Nova rhythm, and Pullara sings like Presley on “Blow Your Nose In Outer Space,” while using kooky examples to discuss laws of gravity. Pullara similarly finds amusing approaches to pack “At My Planetarium” and “Mission Control” with a wealth of scientific information. He shines too on songs like the aspirational “I Wanna Be An Astronaut” and “YoYo The Space Dog,” an endearing ode about his puppy buddy. Aliens, Astronauts and Asteroids! universally succeeds in its mission to deliver blasts of fun music along with interesting nuggets of information about the cosmos.”

Suggested Retail: $14.99 through Midwest Tapes For Ages: For the entire family https://www.stevepullara.com/ instagram.com/stevepullara facebook.com/steve.pullara twitter.com/coolbeansmusic #music
Nappa Awards Winner 2022
Share this...
Don’t Miss Out On The Fun
Sign up for our ENews and be the first to know the latest on toys & family must-haves, giveaways & gift and play ideas!
Follow Us On Instagram #PlayLearnConnect
The tale of compassion and resilience that teaches