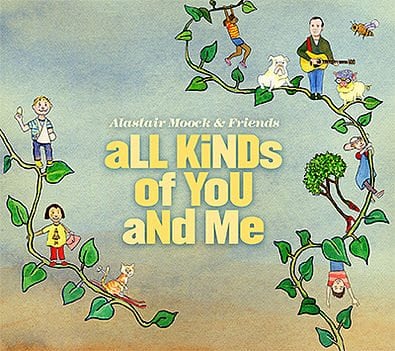 Alastair Moock, a Boston-based, Grammy-nominated artist, is largely inspired by Marlo Thomas’ landmark 1972 album Free To Be… You and Me. For that groundbreaking release, Thomas gathered musical friends to celebrate individuality, tolerance, and changing cultural ideas about gender roles. Moock’s new album builds on those themes, reflecting on gender, ethnicity, and identity today, as well as the evolving concept of family in America. Guests include Rani Arbo and Mark Erelli.

Why we like it: As Moock talks about in the spoken word track, “You and Me,” he was greatly inspired by the landmark album, Free To Be You And Me. All Kinds might not reach those lofty heights but it is an excellent album. Moock has a gift for writing songs with humanism, humor and fine musicianship. Songs here bust stereotypes, promote acceptance and celebrate our differences. One of my favorite songs is “The Bright Side of Me,” a hilarious ode to optimism.

Suggested Retail: $Price: $15 CD; $10 Digital Download For Ages: Ages 4-10 www.moockmusic.com
Nappa Awards Winner 2015 Gold
Share this...
Don’t Miss Out On The Fun
Sign up for our ENews and be the first to know the latest on toys & family must-haves, giveaways & gift and play ideas!
Follow Us On Instagram #PlayLearnConnect
Check out our new Baby Bundle Gift Guide. Features