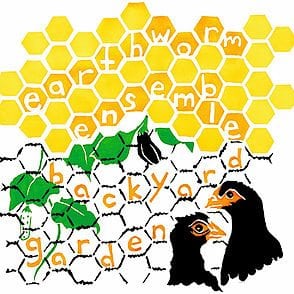 Earthworm Ensemble’s second CD follows their first self-titled album from 2010. Spanning styles from indie rock to zydeco, the 13 original songs provide starting points for family discussions about nature, gardening and a variety of animals. This is a side project of alt.Americana band I See Hawks in LA.

Why we like it: The Los Angeles-based band harvests a winning crop of songs on their sophomore effort. The rootsy music fits in organically with the songs’ topics, which typically involve animals, vegetables or the ecology. A particularly standout track is “I Didn’t Give Up,” a poppy ode to perseverance.

Suggested Retail: $$15.00 For Ages: Ages: 2 and up www.earthwormensemble.com
Nappa Awards Winner 2015 Gold
Share this...
Don’t Miss Out On The Fun
Sign up for our ENews and be the first to know the latest on toys & family must-haves, giveaways & gift and play ideas!
Follow Us On Instagram #PlayLearnConnect
This swaddle and bodysuit included in the Newborn