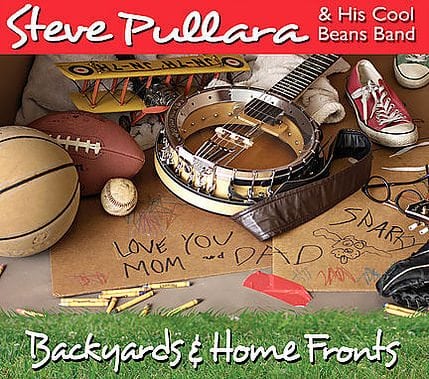 The unique focal point of this album is that it is about children whose parents are deployed serving our country, but it’s not what you’d expect musically. These tracks are imaginative, life-affirming and positive. Meaningful themes of hope, love, and anticipation flow throughout this album. They highlight a typical day through a child’s eye while they are spending time with their grandparents. Grandma and Grandpa are taking care of them until their parents return.

Our product testers had this to say about “Backyards & Home Fronts”:

“Grammy-Award-winner musician Steve Pullara has been involved in issue-based projects that tackle themes about following your dreams, dealing with bullies, and having friends. His latest album also deals with an important subject, although one with a more specific audience – kids whose parents are serving America overseas. Pullara deserves major praise for making this type of concept album, and executing it so well. Highlights include tunes like “Drawing On The Window Of My Car” and “Refrigerator Door” that evoke childhood playfulness as well as the emotionally powerful closing number, “Guess Who’s Coming Home.” While the songs are geared for families who have members abroad, the CD’s sweet music will appeal to all.”

Suggested Retail: $$10 For Ages: For the entire family www.CoolBeansMusic.com
Nappa Awards Winner 2017
Share this...
Don’t Miss Out On The Fun
Sign up for our ENews and be the first to know the latest on toys & family must-haves, giveaways & gift and play ideas!
Follow Us On Instagram #PlayLearnConnect
The tale of compassion and resilience that teaches