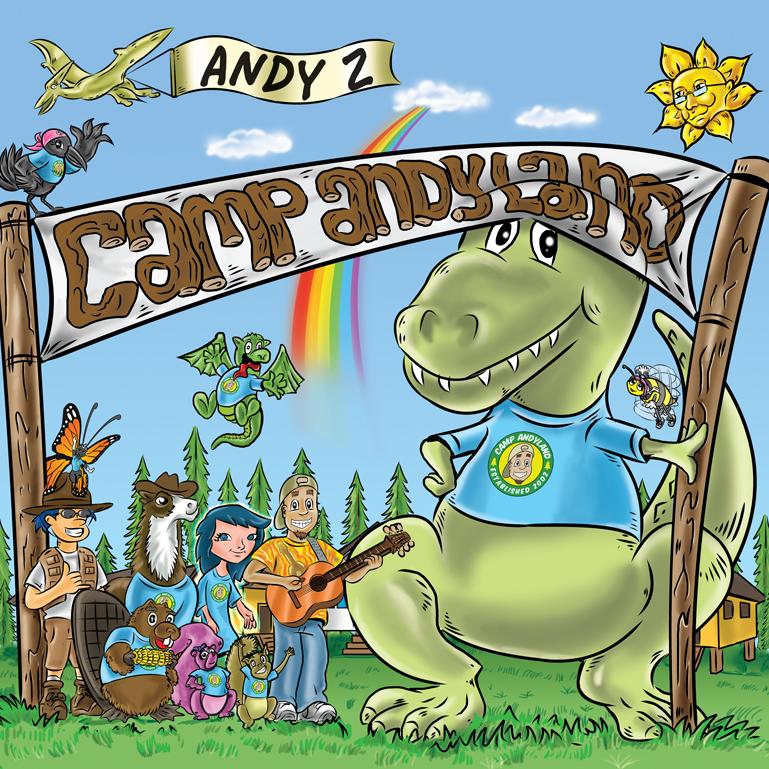 Camp Andyland is the camp every kid will want to go to. Filled with strikingly crafted pop songs for kids, with stick-in-your-head lyrics and catchy melodies – plus a memorable cast of characters that bring kids into Andy Z’s world. An infectious collection of songs compiled from the popular Andyland series that takes kids on a destination-based musical adventure.

Comments from our music evaluator:

“Camp Andyland is a marvelous amusing CD populated by all sorts of creatures (bees, butterflies, squirrels, and dinosaurs) and kooky characters like Cecil the Serpentine Dragon (not to be confused with Cecil the Sea-Sick Dragon from the old Beany and Cecil TV show), the Spanish-speaking Como C. Llama, and the laidback Rancher Dude. Additionally, Andy Z keeps the album zipping along with a whimsical range of musical styles (poppy ditties, camp-fire sing-alongs, funny tunes and message songs) as well as boosting the humor level by singing in a variety of different character voices. Highly entertaining, Camp Andyland definitely is a memorable place to spend time listening to Andy Z’s clever songs.”

Suggested Retail: $$14.98 For Ages: 3-7 http://campandyland.com
Nappa Awards Winner 2018
Share this...
Don’t Miss Out On The Fun
Sign up for our ENews and be the first to know the latest on toys & family must-haves, giveaways & gift and play ideas!
Follow Us On Instagram #PlayLearnConnect
The pacifier that actively supports baby’s breat

This guide explains what anxiety is, how it works,

A card deck with 30 Secret Skills for Fun, Focus,

Unfold the book, turn down the lights, and switch

This is the best live tracks taken from live tours

Finally, a pacifier that soothes babies and parent

A product that will be beneficial for babies and t

This album is where imagination, adventure and pla

This toy has multiple layers of ice-cream swirls t

The perfect first puzzle for kids with pieces that

A form of artistic expression with Chinese cultura

Check out all the amazing products we are loving i

Go see what kids are loving this month in @washing

Want to know the best learning apps for kids? Chec

Happy New Year from the NAPPA Awards family to you

Happy Holidays from all of us at NAPPA Awards! Sen