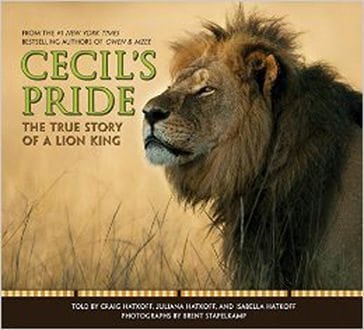 Cecil’s Pride: The True Story of a Lion King by Scholastic

Cecil’s Pride: The True Story of a Lion King, a stunning new picture book about the inspiring and untold tale of Cecil the Lion, from the #1 New York Times bestselling authors of Owen & Mzee, Craig Hatkoff, Juliana Hatkoff, and Isabella Hatkoff.

Why we like it: Wow. This book is a powerful must-read. The authors told Cecil’s story without delving into the politics, even though his death by a trophy-hunter created a “mighty roar…across the globe.” The authors focused on Cecil and not on the trophy-hunter. As such, the book is very touching and will pull on your heartstrings. This book is well-written and the photographs are simply magnificent. Readers will respect and love Cecil and his lion family.

Suggested Retail: $$17.99 For Ages: For Ages to 8 edelweiss.abovethetreeline.com
Nappa Awards Winner 2016
Share this...
Don’t Miss Out On The Fun
Sign up for our ENews and be the first to know the latest on toys & family must-haves, giveaways & gift and play ideas!
Follow Us On Instagram #PlayLearnConnect
Check out our new Baby Bundle Gift Guide. Features