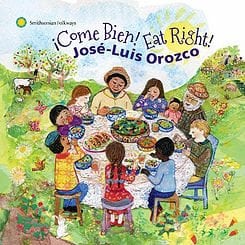 Orozco’s songs for and with children are alive with delightful melodies, tips for smart nutrition, and humor. All tracks on this recording — his first album with Smithsonian Folkways, and produced by GRAMMY-winning artist Quetzal Flores — appear in Spanish and in English, building basic skills in both languages while at the same time showing that it can be fun to eat right—¡Come bien!

Why we like it: This smartly conceived bilingual CD presents 18 tunes in Spanish and then in English. Orozco has a naturally appealing way with music, no matter the language. Smithsonian Folkways also earns applause by including highly informative booklet that helps kids (and parents) understand the lyrics better.

Suggested Retail: $$14 For Ages: Ages: 3 to 9 years www.folkways.si.edu
Nappa Awards Winner 2015 Silver
Share this...
Don’t Miss Out On The Fun
Sign up for our ENews and be the first to know the latest on toys & family must-haves, giveaways & gift and play ideas!
Follow Us On Instagram #PlayLearnConnect
This swaddle and bodysuit included in the Newborn