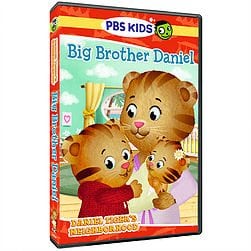 “Big Brother Daniel,” featuring seven tales, shines a spotlight on a relevant topic for families and preschoolers everywhere – smoothing the transition for preschoolers with a new sibling. Inspired by the enduring wisdom of Fred Rogers, the stories on this DVD tackle many of the issues young children encounter with a new sibling such as feeling left out, learning to share time and attention, and appreciating how fun a little sister (or brother) can be.<

Why we like it: Parents who are expecting their second child should know about this DVD, which has a seven-episode story arc from this PBS Kids program that show Daniel Tiger becoming a big brother. In addition to Daniel’s animated world, the episodes nicely integrate some “live action” segments where real kids are dealing with becoming an older sibling.

Suggested Retail: $$12.99 For Ages: Ages: 2 to 4 www.pbsdistribution.org
Nappa Awards Winner 2015 Silver
Share this...
Don’t Miss Out On The Fun
Sign up for our ENews and be the first to know the latest on toys & family must-haves, giveaways & gift and play ideas!
Follow Us On Instagram #PlayLearnConnect
Check out our new Baby Bundle Gift Guide. Features