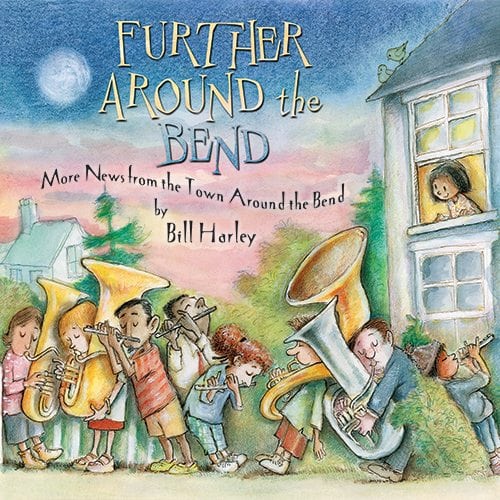 In 2003 Bill Harley took us on a story and song-filled tour of the Town Around the Bend, a town filled with colorful and oddly named characters who did some very unusual things. With stories and songs brimming with charm, humor and wisdom, “Further Around the Bend” celebrates the best of who we are and can be and reminds young and old about the power of community.

Comments from our NAPPA Music Judge:

“A long, long time ago (back in 2003), the sensational storyteller Bill Harley shared some stories and songs set in the mythical town of The Town Around The Bend. Harley’s wonderful new CD tells additional tales and further adventures of the town’s quirky, and eccentrically named, inhabitants. There really is no sense in getting into details, but that would just spoil the joy of listening. Instead, just take a visit to The Town Around The Bend – it’ll be a trip that children and parents alike will find wildly funny.”

Suggested Retail: $$14.99 For Ages: For the entire family http://www.billharley.com
Nappa Awards Winner 2018
Share this...
Don’t Miss Out On The Fun
Sign up for our ENews and be the first to know the latest on toys & family must-haves, giveaways & gift and play ideas!
Follow Us On Instagram #PlayLearnConnect
A sleek line of contemporary natural-hair dolls, c