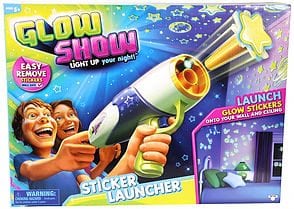 Why we like it: Caution: This launcher is super fun! Glow Show Sticker Launcher is a safe and non-permanent way to let children be a part of starry night bedroom decorating, and is a great way to learn about astronomy, art and following playtime rules so things don’t get sticky!

Suggested Retail: $$24.99 For Ages: Ages: 5 and up www.moosetoys.com
Nappa Awards Winner 2015 Gold
Share this...
Don’t Miss Out On The Fun
Sign up for our ENews and be the first to know the latest on toys & family must-haves, giveaways & gift and play ideas!
Follow Us On Instagram #PlayLearnConnect
A sleek line of contemporary natural-hair dolls, c