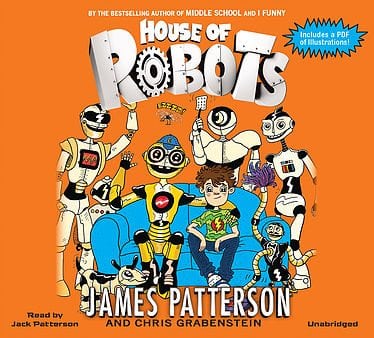 HOUSE OF ROBOTS by Hachette Audio

HOUSE OF ROBOTS is the story of an extraordinary robot that signs up for an ordinary fifth grade class and changes elementary school forever! It’s never easy for Sammy Hayes-Rodriguez to fit in, so he’s dreading the day when his genius mom insists he bring her newest invention to school: a robot he calls E–for “Error”. E not only thinks he’s Sammy’s brother… he’s actually even nerdier than Sammy. Will E be Sammy’s one-way ticket to Loserville?

Why we like it: A wonderfully read story covering the gamut of tween emotions and the struggles of fitting in. Fantastic narration by James Patterson’s son, Jack Patterson, a young and talented voice over artist.

Suggested Retail: $$18 For Ages: Ages: 8 to 12
Nappa Awards Winner 2015 Gold
Share this...
Don’t Miss Out On The Fun
Sign up for our ENews and be the first to know the latest on toys & family must-haves, giveaways & gift and play ideas!
Follow Us On Instagram #PlayLearnConnect
Check out our new Baby Bundle Gift Guide. Features