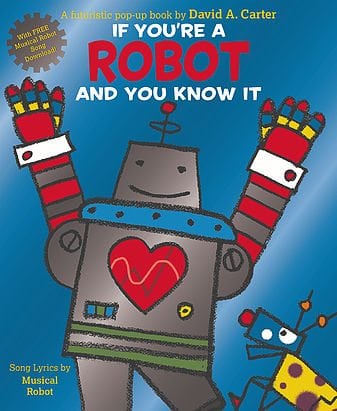 It’s the classic version of “If You’re Happy and You Know” It as you’ve never seen (or heard!) it before. Sing along to the free downloadable song by the dynamic Musical Robot team, then turn the pages as David Carter’s clever pop-ups show the robot characters going through all of the call-out movements, from clapping hands to shooting laser beams out of your eyes!<

Why we like it: David A. Carter is a paper engineer genius and each book he constructs demands attention, but when his clever art meets some fun robots the result is seriously silly. Download a free “If You’re a Robot and You Know It” and sing along. A not-to-be-missed book for singing and robot fans. Shout hooray!

Suggested Retail: $$16.99 For Ages: Ages: 3 to 5 www.edelweiss.abovethetreeline.com
Nappa Awards Winner 2015 Gold
Share this...
Don’t Miss Out On The Fun
Sign up for our ENews and be the first to know the latest on toys & family must-haves, giveaways & gift and play ideas!
Follow Us On Instagram #PlayLearnConnect
Check out our new Baby Bundle Gift Guide. Features