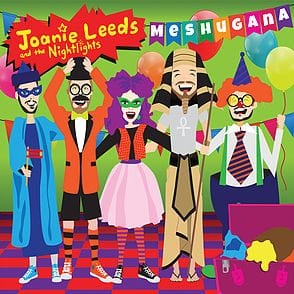 Meshugana by Joanie Leeds & The Nightlights

Multi-award winning songwriter Joanie Leeds is joined by her band The Nightlights for their 7th CD! Meshugana is made up of stories set in the Jewish context, embracing each holiday throughout the calendar year along with themes such as love and family. The simple Hebrew words used throughout Meshugana are all translated in the liner notes and focus on family values rather than religious texts creating accessibility for all who listen.

Why we like it: A popular, award-winning musician on the family music scene, Leeds digs into her Jewish roots for her latest album. While tunes touch about Jewish themes, connect with holidays and include some Hebrew words, this shouldn’t be viewed as religious music. The spirited, upbeat songs, which come in a range of musical styles, should appeal to kids whether they are Jewish or not.

Suggested Retail: $$15 For Ages: Ages: 5 to 8 www.joanieleeds.com
Nappa Awards Winner 2015 Silver
Share this...
Don’t Miss Out On The Fun
Sign up for our ENews and be the first to know the latest on toys & family must-haves, giveaways & gift and play ideas!
Follow Us On Instagram #PlayLearnConnect
This swaddle and bodysuit included in the Newborn