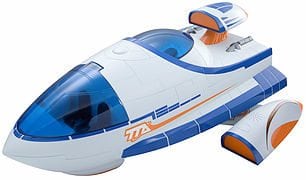 Miles from Tomorrowland Stellosphere by TOMY

As seen in the new hit Disney Junior series “Miles from Tomorrowland,” the Stellosphere spaceship inspired by the Callisto family’s home transforms into a playset that includes a Mini StarJetter and a Zip Ship, as well as a Cross Vehicle Rocket System (XVR) that attaches to all 3 ships and adds lights and sounds!

Why we like it: Three ships in one makes this toy out of this world! Pretend play and imagination will soar into the stratosphere with the Stellosphere as kids create space missions and engage in scientific exploration.

Suggested Retail: $$49.99 For Ages: Ages: 3+ years http://tomy.com
Nappa Awards Winner 2015 Silver
Share this...
Don’t Miss Out On The Fun
Sign up for our ENews and be the first to know the latest on toys & family must-haves, giveaways & gift and play ideas!
Follow Us On Instagram #PlayLearnConnect
This swaddle and bodysuit included in the Newborn