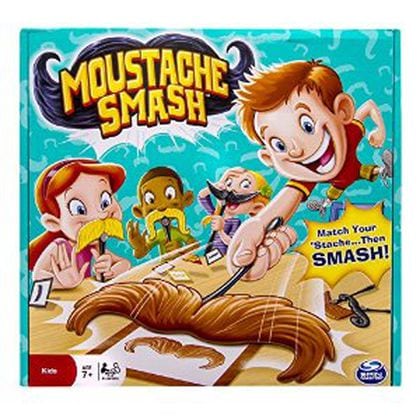 Moustache Smash is the matching game that is speedy, silly-looking fun! Each player keeps a moustache held up to their face. As each card is turned over, watch for a card matching your ‘stache in either color or shape. See a match, then smash it fast! Be the first to smash the ‘stache card and your moustache’s suction cup will pick it up and you score a point. But don’t smash the wrong card, or you’ll pay a penalty and lose two of your cards into the pot. Collect the most moustache cards and you win!

Why we like it: Match the stash or get ready to pass! It’s a game of speed and matching as each player slaps their moustache on its corresponding card. To maximize the crowd-pleasing hilarity, each player holds up and “wears” the moustache before each card is turned over. Moustache Smash will have you in stitches!

Nappa Awards Winner 2014 Gold
Share this...
Don’t Miss Out On The Fun
Sign up for our ENews and be the first to know the latest on toys & family must-haves, giveaways & gift and play ideas!
Follow Us On Instagram #PlayLearnConnect
A sleek line of contemporary natural-hair dolls, c