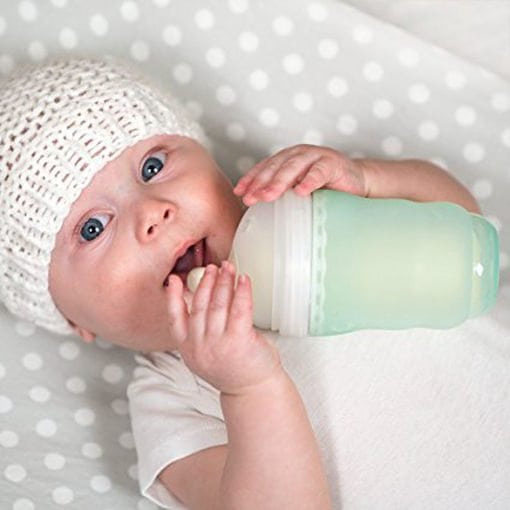 The Olababy Gentle Bottle helps baby transition from breast to bottle. Designed to mimic a natural breast, the nipple design allows for easy latching and reduces bottle rejection. Dual-venting works as an anti-colic system, and improves air flow. The off-centered nipple enhances outflow and reduces leftover residue. A wide neck makes it easy to hold, as well as clean. Made with medical-grade silicone, the Gentle Bottle is 100% BPA, PVC, and Phthalate free.

Our product testers had this to say about the Olababy Gently Bottle:
“This nipple was a game changer! Yes the bottle is soft to the touch and wide, but lots are. For me, this was the easiest transition I’ve had between breastfeeding and bottle-feeding. There was no rejecting from day one. With my first child, it took literally months before he would eat as equally well from a bottle vs. the breast.”
“I love how big the bottle is. It doesn’t take much for baby to hold it and squeeze it so he eats much better and I don’t have to hold the bottle the entire time, just be there to support as he squeezes it.”
“Love the gentle colors. I have twins, so feedings aren’t easy. the different colors allow for me to know who ate what without having to write everything down. Love the nipple as well, but you have to be careful not to spill the milk everywhere. If you test the nipple before with water, you’ll make sure it’s on right. After that, we were golden. Nipples are expensive, but it’s silicone, not plastic, so it’s worth it and it lasts so much better than other nipples!”

Suggested Retail: $$11.95 For Ages: Birth to 24 months www.olababy.us/products/gentlebottle
Nappa Awards Winner 2017
Share this...
Don’t Miss Out On The Fun
Sign up for our ENews and be the first to know the latest on toys & family must-haves, giveaways & gift and play ideas!
Follow Us On Instagram #PlayLearnConnect
Check out all the NAPPA Winning Products featured