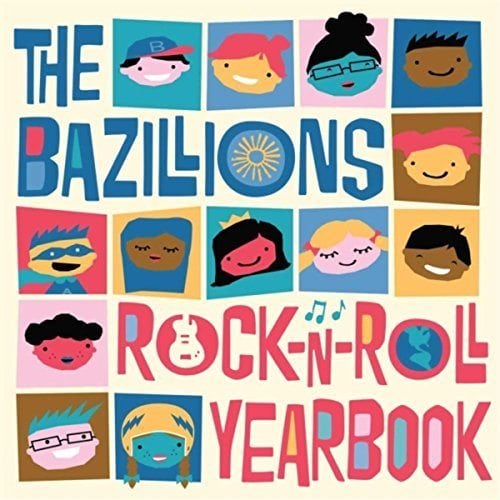 Rock-n-Roll Yearbook by The Bazillions CD

The Bazillions known for their “pitch perfect twangy indie pop rock,” tight harmonies and tangentially educational songs and music videos, release a soundtrack for the school year. From the first hand-clappy track “Back to School,” the energy remains high on this new album. Appealing to adults, the album is chock-full of musical references, from The Fab Four to The Who, The Monkees and Elvis Costello to the bossa nova masters.

What our Music expert had to say about Rock-n-Roll Yearbook by The Bazillions CD:

“The Bazillions get a solid A for their Rock-N-Roll Yearbook. The band nicely executing the CD’s concept of a year at school, although they do go outside the lines a little. They also display very impressive musicianship; it is fun and sharply played but not flashy. More importantly, the Minneapolis-based quintet delivers a dozen terrific tunes. Tracks like “Wide Open World Of Adjectives” and “Queen Ellen of the Spelling Bee” earn high marks for their clever wordplay, while “New Pair of Shoes” stands out as a playful, rocking number. The song, however, that ranks at the top of the class might be their quietest tune – “Keep Your Identity Safe.” This story about a best friend moving away is both wonderfully heartfelt and marvelously detailed. The Bazilions’ Yearbook is an album that is a great listen from beginning to end.”

Suggested Retail: $$15.00 For Ages: For Ages 4 to 9 http://www.thebazillions.com/music/
Nappa Awards Winner 2017
Share this...
Don’t Miss Out On The Fun
Sign up for our ENews and be the first to know the latest on toys & family must-haves, giveaways & gift and play ideas!
Follow Us On Instagram #PlayLearnConnect
This swaddle and bodysuit included in the Newborn