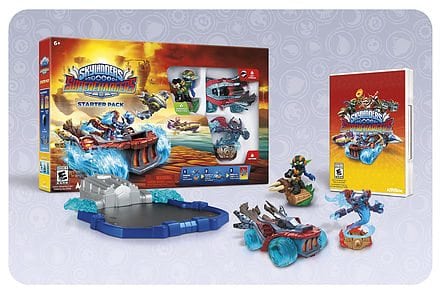 Why we like it: Once again, Skylanders goes to great lengths to both innovate on the game as well as be inclusive of previous versions. My favorite part of Superchargers, which is also it’s big selling point, is the new vehicles. Rather than introduce a new kind of Skylander as they have in the past, they are now introducing vehicles for Land, Sea and Air. I like that the vehicles themselves have a certain amount of customization available to the player, but what I really like about them is how this opens up the world to the player. There’s always been the freedom to explore, but now players will be able to explore more 3-dimensionally. Granted these are levels specifically designed for the vehicles, but it does open up a new aspect of gameplay. The ability to super-charge the vehicles by pairing them with specific characters is another nice touch.

Suggested Retail: $$74.99 For Ages: For the entire family www.skylanders.com
Nappa Awards Winner 2015 Gold
Share this...
Don’t Miss Out On The Fun
Sign up for our ENews and be the first to know the latest on toys & family must-haves, giveaways & gift and play ideas!
Follow Us On Instagram #PlayLearnConnect
Our annual Jingle Guide is here again! Featuring o