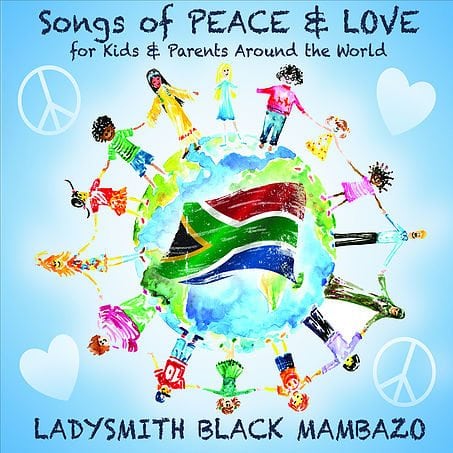 Songs of PEACE & LOVE for Kids & Parents Around the World by Ladysmith Black Mambazo.

South Africa’s pre-eminent singing group, winner of four Grammy Awards, presents a collection of newly recorded classic songs with a message to families to share during these trying times. “With our new album, we want to share our songs of peace and love with the little ones,” group member Albert Mazibuko says. He adds, “We want parents to have a collection of songs to listen with their kids, songs that hold important messages. “

Our product testers had this to say about “Songs of PEACE & LOVE for Kids & Parents Around the World”:

“If you are familiar with Ladysmith Black Mambazo from their work on Paul Simon’s Graceland CD or their own award-winning albums, then you know the joyfulness they bring to their music. This family-focused release, something of a follow-up to their Grammy-winning Singing for Peace Around the WorldLive, certainly exudes that same sense of jubilance in their vocals. The songs, moreover, convey some important, positive messages about peace, love, and tolerance. Among the ten tunes here is a rendition of their signature song “Homeless,” and a rather unique version of “Old MacDonald.” One of the particularly nice things about this CD are the short, spoken introductions that explain what each song is about. This is helpful since the group sings in both English and Zulu along with making the music feel that much more personal.”

Suggested Retail: $$15 For Ages: Suitable for all ages www.mambazo.com
Nappa Awards Winner 2017
Share this...
Don’t Miss Out On The Fun
Sign up for our ENews and be the first to know the latest on toys & family must-haves, giveaways & gift and play ideas!
Follow Us On Instagram #PlayLearnConnect
It's the Season of Wonder in Northeast Ohio Parent

Check out all the NAPPA Winning Products featured