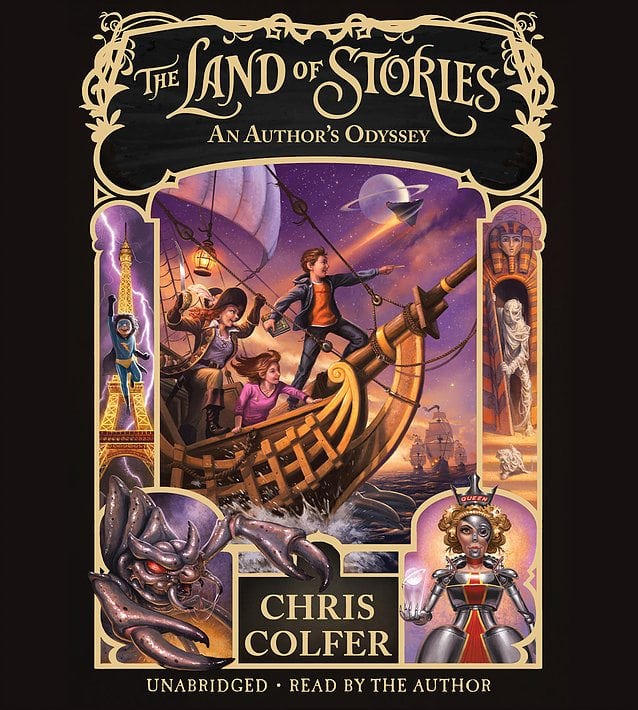 THE LAND OF STORIES: AN AUTHOR’S ODYSSEY written and read by Chris Colfer by Hachette Audio

In the highly anticipated fifth book in Chris Colfer’s #1 New York Times bestselling series The Land of Stories, Conner learns that the only place to fight the Masked Man’s literary army is inside his own short stories!  Can be used to demonstrate conflict resolution, use of literary devices such as irony and literary allusions, and comparing fairy tale retellings. “There’s more in Colfer’s magic kingdoms than Disney has dreamt of.”- USA Today

Why we like it: This is the fifth adventure in the Land of Stories series. It is read by its author, Chris Colfer, who is a New York Times best-selling author and a Golden Globe-winning author. He was honored as a member of the TIME 100, Time magazine’s annual list of the 100 most influential people in the world. The running time is approximately 10 hours presented on 8 CDs. Land of Stories is an incredibly popular series and this will be treasure for its fans!

Suggested Retail: $CD: $25.00 / DL: $22.98 For Ages: For Ages 8 to 12 www.soundcloud.com
Nappa Awards Winner 2016
Share this...
Don’t Miss Out On The Fun
Sign up for our ENews and be the first to know the latest on toys & family must-haves, giveaways & gift and play ideas!
Follow Us On Instagram #PlayLearnConnect
Move to the beat with this loveable pet. Create mu

Puzzles that tell the stories of a squirrel in the

The planets and animals are talking to you! It’s

Travel through outer space musically in your own o

A smart friendly night vision camera that lets you

Help little ones care for themselves and learn abo

Join Princesses Aurora, Belle and Cinderella in a

Rev up the fun! Buckle up, it's time for a rowdy r

Spider-Man, Spider-Gwen, Miles Morales, and their

TOMY is revealing a new look to the Lamaze brand o

It's glow time! Hit the lights and color in the da