We were lucky enough to be able to interview Paul Axtell, the author of the NAPPA award-winning parenting book, 10 Powerful Things to Say to Your Kids: Second Edition. With a great understanding of the power of conversation, Paul Axtell shares his best tips on positive parenting and how parents can build healthy relationships with their kids. Axtell’s wisdom has helped parents across the globe connect and reconnect with their children, as his inspiring words give them the tools they need to create strong and long-lasting relationships. Our interview digs deeper into who Paul Axtell is, the challenges he’s faced as a parent and what he’s learned along the way. #parenting #kids #baby 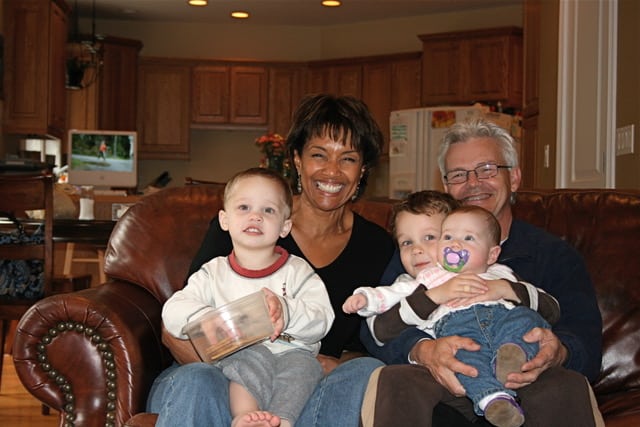 Paul and his wife, Cindy, with their three grandchildren, Sam, Ben, and Caroline

What are some of the best things you have said to your kids that inspired you to write this book?

Actually, it might have been some of the worst things I said that led to this book. Once I became aware of how our conversations and interactions influence our children, I worked hard on three areas: listening longer and more attentively, giving far less advice and correction, and telling them how proud I was of them as people—not just for what they did.

What would you say to a parent who struggles to get their child to respond to positive reinforcement? 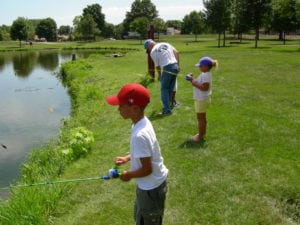 Paul taking his grandchildren, Trey, Isabel, and Reece on their first fishing trip

Only give positive reinforcement when it is deserved and needed. Anything that we overdo in life stops having an impact. Motivation is a self-generated phenomenon, so we should stop expecting that we can motivate our kids. Being interested in and supportive of what they want to do can be more effective in the long run.

What is the biggest mistake you’ve made as a parent that helped shape the way you parented later on?

Two things: First, I wasn’t very expressive, so I didn’t tell my kids that I loved them. My excuse was that actions speaks louder than words—which is a poor reason not to tell them. Second, I got angry over their lack of performance and said things I immediately regretted rather than engage with them calmly and thoughtfully about what happened. The good news is that it’s never to late to start doing things differently, and I’m grateful to have great relationships with my kids and with my grandchildren.

What would you say to a parent who first reads your book after feeling like they already have a broken or unsatisfactory relationship with their child?

As I said, it’s never too late. Your kids love you unconditionally and will always want to have a relationship with you that is close. Change who you are and they will respond, given enough time. Also, stop having the conversations that caused the disconnect and start having conversations that your kids think are worth having. If you’re not sure, ask them. And be patient. Rebuilding bridges is a lot harder than constructing them in the first place. 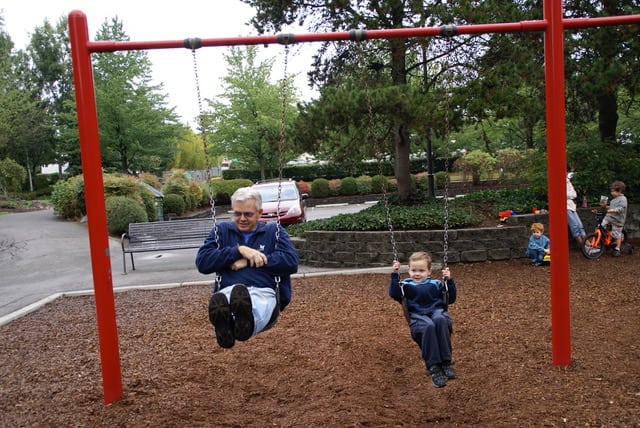 Paul and his grandchild, Ben, on the swings

If a parent sees that a discipline or communication technique works with their kids when they are younger, but not when they are older, what advice would you give to help them adjust their parenting style?

After age 12 or 13, stop giving them advice unless they specifically ask for it. Treat them as you would a friend or colleague. They deserve to be interacted with in that way, and they will respond. I always reminded myself that I really don’t have any rewards or punishments that will change their behavior. I can let them know that I disapprove, but it’s up to them to decide what to do next. As parents we’re conditioned to want to protect our kids from disappointment or failure, but it’s those experiences that teach them resilience and help develop their own wisdom.

What would you have done differently if you read your book before you became a parent?

I would have read to them or with them constantly. I would have shared more of my own troubles and anxieties. I would have set up weekly conversations where they knew we could talk about anything and everything — both of us having the freedom to go wherever the conversation took us.

What can parents say to each other during disagreements that can set a positive example for their children?

I like this question because children learn how to be in a relationship by watching their parents or grandparents interact with each other. “I’m sorry” is powerful. “Let’s go for a walk and talk this through” works well, too. Slowing down and listening attentively to your partner demonstrates respect. “I appreciate what you’re saying, and I see it differently. May I tell you?” shows that you’re listening and respectfully asking permission to explain a different viewpoint. It’s all about showing respect for each other in the midst of disagreement. And, of course, keeping voices calm has to be the starting place. 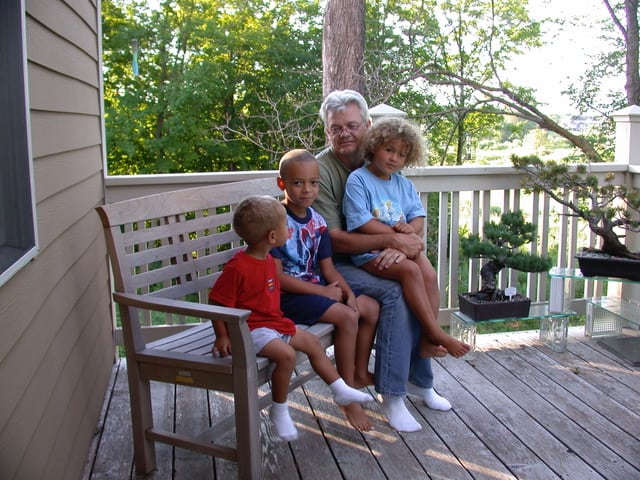 Paul sitting on the porch with his grandchildren Trey, Isabel, and Reece

As someone who is a grandparent, how does the dynamic change when you are a parent to a child who has children of his or her own?

For me, I want to make sure I don’t undermine my kids in how they interact with their children. I also want to encourage my grandkids to tell me about their lives and listen intently when they do. Lastly, I ask them for help rather than expecting they will notice what needs to be done and volunteer without asking.

Even if a parent follows your advice about making children feel open and expressive at home, how should parents deal with issues arising from outside sources such as from their peers or teachers?

This is a tough question because I don’t know all the players in a situation. Still, I want to hold my children responsible for making it work rather than rushing to their defense or telling them what they should do. I want to ask them questions that will help them figure out what they think is the right thing to do. For example: “What would your teacher like you to say or do” or “What might you do to support your friend who was not invited?” 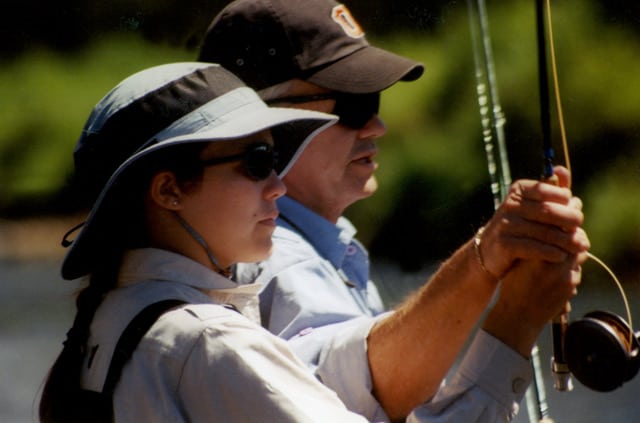 Paul and his daughter Amy fly-fishing together

Life sometimes comes with tragic obstacles such as losing a job or grieving from a loss. How can parents effectively communicate with children and young children during such pressing times?

This is of course age dependent. It doesn’t make sense to trouble a small child with something they can’t understand. Older children need to be included—not in a drama-filled way, but in a matter-of-fact way: “This has happened and this is what we are going to do about it. It is upsetting, but we will get through this. If you want to know any more about it or talk about it at any time, please ask.” Kids don’t need certainty to handle difficult situations or change, but they do need clarity about what is happening. If you don’t include them, they will make up the worst. Plus, you can’t really hide your emotions from them. They sense when you are hurting, so let them know why.

From single parents to stepparents, and from households with one child to households with eight children, families come in all shapes and sizes. What is your best piece of universal advice that you think every family could benefit from?

Make sure your kids always know that you will be there for them, forever. And then put the world on hold and listen without judgment when they share about what is going on in their lives. The Buddhist monk Thich Nhat Hanh said it best: The most precious gift we can offer anyone is our attention. 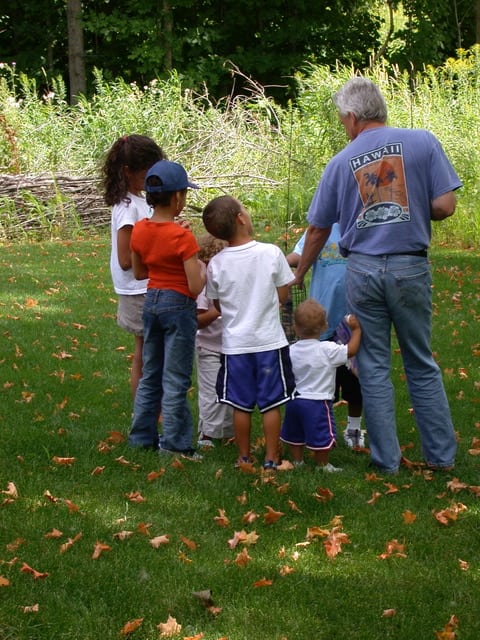 Paul in the backyard with his grandchildren Haley, Camille, Isabel, Trey, Reece, and Collin

Share this...
Don’t Miss Out On The Fun
Sign up for our ENews and be the first to know the latest on toys & family must-haves, giveaways & gift and play ideas!
Follow Us On Instagram #PlayLearnConnect
Jam-packed with puzzles for preschoolers and toddl