Get ready for some chomping, stomping and roaring fun with these latest NAPPA Award winners! 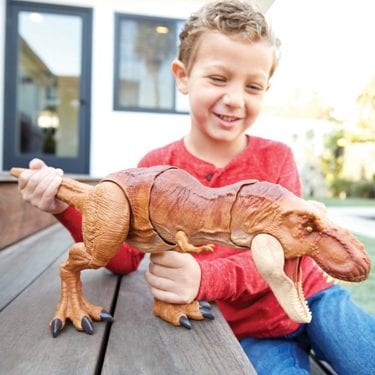 Right out of Isla Nublar comes Mattel’s Jurassic World Thrash ‘N Throw Tyrannosaurus Rex. Authentic design and cool sound effects like chomping, stomping, an impressive roar and a HUGE bite. Use her tail activation to open her mouth, pick up other human and dinosaur action figures then thrash and throw them across the room just like in epic scenes from the movies. Great for building imagination and story telling skills. $39.99, ages: 4+ 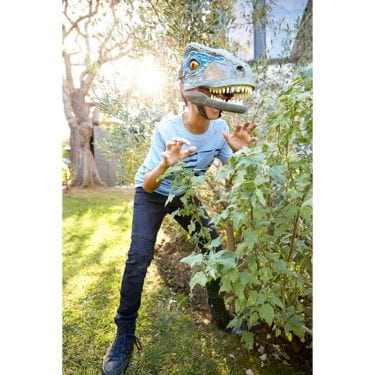 Get ready to welcome fan favorite, Velociraptor Blue – from Jurassic World, to your home. Great for hours of role-playing and story telling. The Chomp ‘N Roar Mask features realistic details like skin texture and color and teeth and eyes that move to focus on prey. When the electronic mask’s jaw opens to varying degrees, there are three levels of sound effects that really make the mask ROAR into action. $34.99, ages 6+

Little dinosaur fans will love to create endless adventures with the LEGO DUPLO Jurassic World Gentle Giants Petting Zoo set. Great for developing fine motor skills, imagination and story telling skills. Kids can create lots of stories as they build the baby dinosaur enclosure and help Gray Mitchell use his camera to snap pictures of the baby Triceratops as he stands on the swinging bridge, or the Diplodocus as he eats the vegetation. Includes a LEGO DUPLO Gray Mitchell figure plus two baby dinosaur figures. $19.99, ages: 2 to 4