We spoke with Nick Metzler, an L.A.-based toy and game designer who began inventing and tinkering when he was a kid. At just 16-years-old, Nick won first place in the Young Inventor Challenge (Y.I.C.), a unique competition for kids ages 6-18 to showcase their talents and get a chance to have their toy or game manufactured. Nick won again the following year, and his game Squashed was put in stores. With an impressive collection of work under his belt, Nick now works for Spin Master, a leading toy and game producer. Nick is eager to give back to the Y.I.C. community and help other kids realize their creativity and potential. 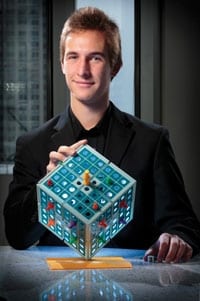 What interests did you have as a child that led you to inventing?

My childhood was naturally creative. When my mom heard I was bored, she’d instruct me to go to the recycling bin, dump it out, and make something with whatever was in the bin. Fake water parks, new shelves for my room, artistic projects, the possibilities were endless! I also loved making ‘contraptions’ which I recently learned were actually named ‘Rube Goldbergs’. I used to take anything and everything from my house and turn it into a contraption- hot wheels, cans, bouncy balls, dominoes, strings, card houses, and more. I loved creating systems that worked with just a little push, it excited me to see those ideas come to life. As a game inventor, now I design environments that can foster emotions that I’d like the players to experience. With just a little push, they can have memorable fun experiences with their friends and family! 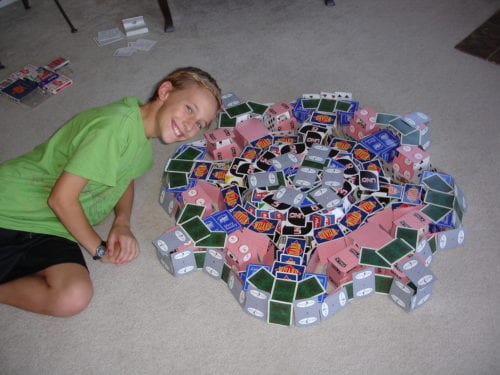 What can parents do to encourage their child’s imagination?

Creation happens when you break away from the intended use of objects. It happens when you ask: “Can this food become a space ship?” or “Can I turn this lump of wood and metal into a Survivor challenge?” Creation is a function of combining disparate concepts, things that shouldn’t normally happen. It’s that smashing of random stuff together that makes invention happen. As adults, we call this innovation- taking a previously working gizmo and making it achieve the same goal in a more efficient way, perhaps by borrowing a solution from a completely different discipline. Parents can encourage imagination by challenging their children to solve problems with objects on hand, even though a magic bullet is right beside you. Children have an innate desire to continue tinkering even through failure, because they believe the solution to be possible. It’s only in adulthood that we block that urge with embarrassment of failure and feelings of self-doubt. Break away from the intended use of products, use lipstick as a marker, use packing peanuts as fake snow, use holographic Kleenex boxes as the backgrounds for your self-designed trading card series! Make your life a little more inefficient and it’ll spark creativity. Don’t give your kids the answers. Give them the goal and the rules of the game and they’ll start to create strategies themselves. 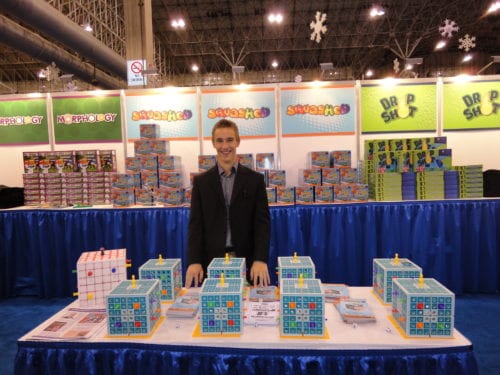 How did you transform your passion for inventing into a career?

Turning my passion for inventing into a career sort of happened by accident, and a good chunk of luck. My mom saw an ad in the newspaper for the Chicago Toy and Game Fair (ChiTAG)(the only toy and game fair open to the public in the nation) and told my sister and I that we were going. I wasn’t super psyched about it at the time, but I liked games so I went along not knowing that it was going to shape the next several years of my life. There, I saw the Young Inventor’s Challenge. The Y.I.C. was like a science fair, but for toys and games, and there was only a few entries. I walked around and wasn’t super impressed with the entries…having made 20 of my own games to this point. Within 20 minutes of looking at the competition I told my mom that I was going to win it the year after. One year later I won the senior division with a game called That’s Cheating!, a board game version of B.S. where the best cheater wins. I had an absolute blast with the competition and got a chance to meet the President of the Chicago Toy and Game Fair. She said that the ChiTAG Y.I.C. needed some advertising help, and I agreed to expand the Y.I.C. to several schools in the area. To help, I was put on the news and in magazines, all of which grew the Y.I.C. by 500% in one year to 250 entries. I entered again the year after with a game called Squashed and became the Y.I.C.’s first back-to-back winner. Squashed was licensed the following day by Tim Kimber, CEO of PlaySmart, where Squashed lives today. That really made a splash. That, plus a solid, short career in the industry has resulted in being named the Young Inventor of the Year for the entire industry in 2013, and I’m now a finalist for the Rising Star Innovator of the Year. Please vote if you think I earned it. I’m in the 4th category. 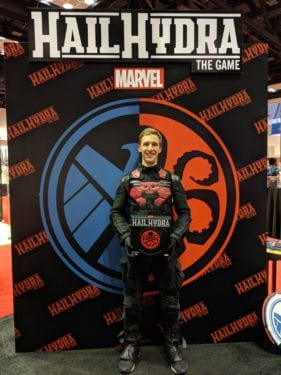 Can you tell us a little bit about any projects you’re looking forward to?

I can’t say much about any projects I’m currently working on, since I’m under NDA (non-disclosure agreement), but in the recent past I’ve consulted as a Survivor challenge designer, a theme park ride designer, an immersive theater gameplay director, and more. I’m currently developing a game show run entirely online, and also just started running a Facebook group called Gaming Life, which is focused on applying game metaphors and game ideas to improving your career and life. I have the unique ability to apply game design to any medium and I intend to use it to transform the world into one that is unbelievably fun for anyone who wants to play in it. There is one game that’s coming out December 1st, 2018 though that I’m particularly excited about- it’s called Good Question and you’ll need an Alexa device to play. Just pick a card from the deck to start. On the card is a single word. Your job is to get Alexa to say that word, without saying the word yourself. You can ask any question you want. It’s quite fun, especially with a group. Here’s a sample–Get Alexa to say the following words: Hour, Pepper, Unicorn, Bolt. There’s tons of words in the game, with more rules to play with, but you can play the basic game right in your home, right now. Don’t forget to ask a Good Question. 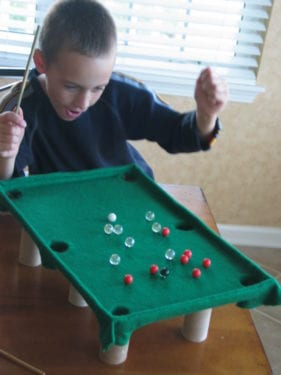 What is the Young Inventor Challenge and how can kids get involved?

The Young Inventor’s Challenge is always in October. So this is a great time to think about next year’s competition. You can start researching it this year and compete next year. That strategy worked out well for me. If you’re in L.A. instead of Chicago, never fear- there’s a video submission option. I’m not sure if these options can win (they might be able to), but they’ll definitely get judge feedback. All the judges are members of the industry who all have a desire to give back and mentor the next generation of inventors, so it’s quite a supportive community. Here’s the link to register for the Y.I.C. 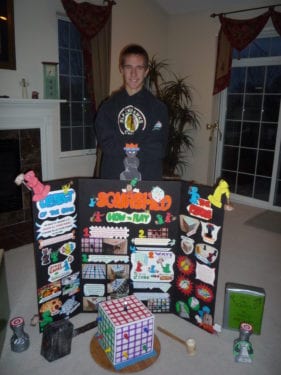 What is the best advice you ever received regarding harnessing your creativity?

The best advice that I’ve ever received to harness my creativity is to take something I like, find something I can make better about it, and try to make it. Use anything at your immediate disposal and improve over time. It’s how I started designing games. I hated how long the moves in chess took. I just wanted a faster game, so I made one called extreme chess. It was a lot more carnage. Every move basically resulted in losing a piece, or if you used the cannon, you could wipe out entire columns in one shot. I tinkered a bunch with classic games to make my own. Back when I was young, making a game ‘better’ just meant making it more of what I wanted. As I grew older and realized my sister hated playing strategy games with me, I made those same games better by adding a bit of luck, even though I personally didn’t like the addition. It was better because it was more fun for everyone else around me. 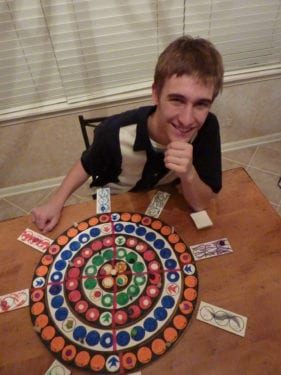 If you could tell your 8-year-old self one thing, what would it be?

The future of cryptology is in computers, not ciphers. Also, you’re going to love meat in the future. Crazy concept I know. And burritos. When you hit college you won’t even be able to count the foods you like on 2 hands. Also, a slice of pizza every day for a full summer is a bad idea.