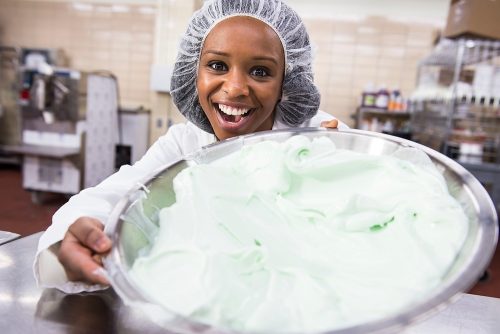 Maya Warren has a job title that would get most kids’ attention. She’s an ice cream scientist. Translation: Warren is senior director of international research and development/tastemaster at Cold Stone Creamery, and has a doctorate in food science from the University of Wisconsin-Madison, specializing in frozen desserts. After being introduced to food science through the Food Network show “Unwrapped,” she decided to combine her passions for ice cream and chemistry to create a career that lets her do what she loves every day.

While her favorite ice cream flavor fluctuates between cookies and cream and a double-buttered candied pecan that is her own creation, the L.A.-based flavor maker finds inspiration for new flavors everywhere. “Whether it is at a fine dining restaurant, the candy or yogurt aisle at the grocery store or just following up-and-coming food trends across the globe, creativity is always around us,” Warren says. “It is really fun to push the envelope with ice cream flavors.”

Honey, cornbread and blackberry jam? Thai curry, peanuts and lime? Why not! “The flavors you can make are totally endless!” Warren says. “Now, not everything will taste amazing, but you never know when you might develop an amazing flavor that will leave people wanting more.”

What does she eat when she isn’t eating ice cream? “I love a great plate of veggies,” Warren insists. “I pretty much add spinach and broccoli to anything and everything … except ice cream. I’ve definitely not tried spinach or broccoli ice cream!”

The recipe this ice cream scientist has shared is the no-churn variety, which means you can make it without an ice cream maker. She says both varieties are very tasty, and that the main difference is in the process. No-churn recipes involve whipping the cream separately to create foam and give the mixture lightness, which wouldn’t be efficient for large-scale production. Ice cream that is churned freezes a prepared mixture and uses the machine to incorporate air during the freezing process.

Using this no-churn recipe, you create the base, then let your creativity loose to create your own flavor combinations. “Layer in whatever your creative mind and taste buds desire!” says Warren. Want more inspiration? Follow the ice cream scientist on Instagram, where she hosts live “Ice Cream Sundays with Dr. Maya,” demonstrating her recipes so that families can follow along. 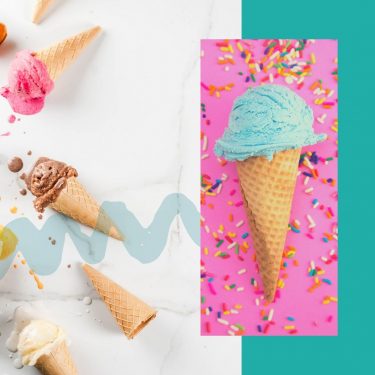 1¼ cups of sweetened condensed milk (approximately one 14-ounce can)

In a large mixing bowl, combine the sweetened condensed milk, evaporated milk and vanilla extract.Gently mix with a spatula until homogeneous, then set aside.

Pour the heavy whipping cream into a smaller mixing bowl. Starting on the lowest speed to avoid splashing, then gradually increasing to the highest speed, whip with a hand or standing mixer until whipped cream forms stiff peaks, about 3-5 minutes. Be careful not to over-whip the cream or it will turn into butter.

Using a spatula, scoop and gently fold the whipped cream into the sweetened condensed milk mixture until all of the cream is folded in. This now becomes your ice cream base – set aside.

Share this...
Don’t Miss Out On The Fun
Sign up for our ENews and be the first to know the latest on toys & family must-haves, giveaways & gift and play ideas!
Follow Us On Instagram #PlayLearnConnect
Gifts that are mess-free and full of fun @Potty_Tr

A great gift to give baby the best care and comfor

Happy Thanksgiving from our NAPPA family to yours.

These essentials will soothe and calm baby anytime

These essentials are the perfect gift for baby @ma

These products are perfect gifts to ensure baby is

The ultimate party game just got even more…ultim

Amazing gear for baby at home or on-the-go @dreamo

Check out these amazing baby items from our 2021 B

Mom comforts, strengthen and protects. Show her yo

Show mom that she is the best with these clothes a

Check out these award-winning gifts special for mo

Next up, Best for Mom! Amazing ideas for pre- and

Let’s kick off the Bundle Guide ideas to gift so

We have a winner! Congratulations to @star.chaser.

CLOSED: It’s time for another GIVEAWAY! Win this

Personalize your own water bottle with this unique