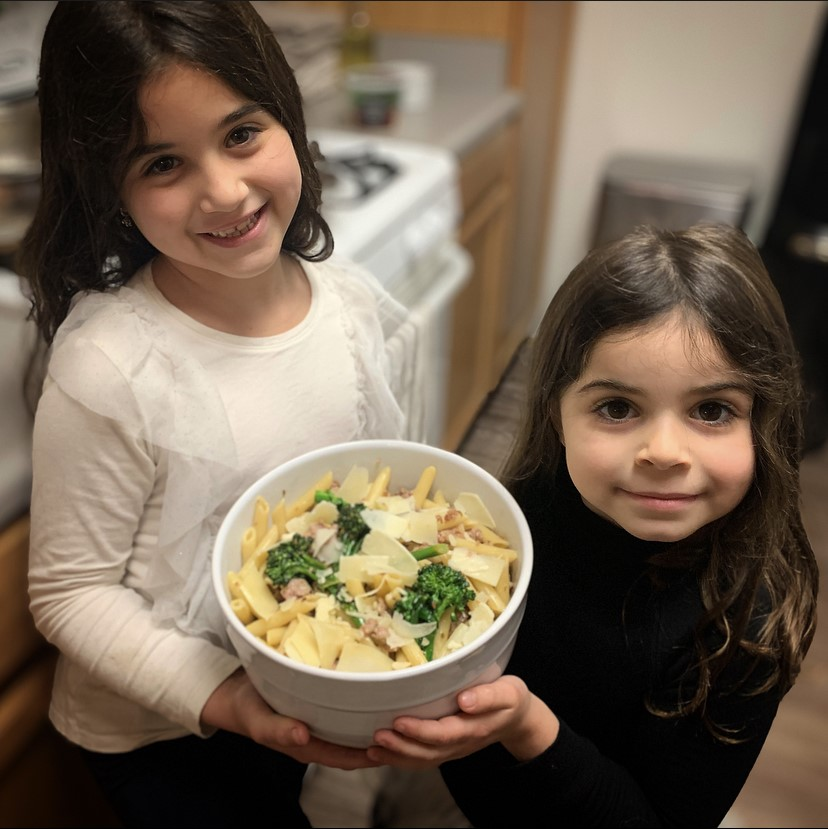 Want to make cooking with your family easier and more fun? Set yourself up like a restaurant kitchen, says Peter Tulaney, L.A. dad of two and head chef and founder of The WEHO Sausage Co.

Tulaney, who spent 10 years as a child psychologist, started making sausage at home after receiving a Kitchen Aid standing mixer (with sausage attachments) as a gift. He shared his creations with friends and began getting requests to cater parties and other events, creating a side business that stole his heart.

After almost two years, he made the change. “The difference between my daily routine as a clinician and having a party with someone was too much to ignore,” says Tulaney. “So, I decided that I would take a couple years to become a better food person and start to break down my practice.” And that’s just what he did. Tulaney left psychology, leased space in a commercial kitchen in Downtown L.A. and launched WEHO as a full-time catering business.

The company grew, catering events and corporate lunches before the COVID-19 pandemic put an end to business as usual. WEHO went from 15-20 weekly catering deliveries to zero.

Fortunately, Tulaney had other irons in the fire. He had been in talks with Citizen Public Market, the Culver City food hall that opened its doors in November. While the sausage is still processed in the Downtown kitchen, the food served at the market is all made on site. They are open from 11 a.m.-9 p.m. Tuesday through Sunday for takeout. The menu includes sandwiches with hamburger, sausage (pork, chicken and lamb) and veggie patties, fries, salads and charcuterie. There are also dishes for weekend brunch.

With a day’s notice, you can also order packs of uncooked, frozen sausage patties (which Tulaney points out can be broken up and used loose) for pickup at Citizen Public Market or the WEHO facility Downtown. It’s exactly what you’d use in this recipe, which Tulaney says harkens back to his childhood. “I’m from Bay Ridge Brooklyn, and my mom cooked every single meal that I ate growing up,” he says. “This is just the style of food we ate.” Everyone loves pasta and the dish is inexpensive and quick to make. “The whole thing, start to finish, takes place in less than 20 minutes and that includes boiling water,” says Tulaney.

As a chef, former child psychologist and father to daughters ages 5 and 7, Tulaney says cooking with kids can be fun for all if it’s well organized. “The way a commercial kitchen operates is not hard to reproduce if you’re doing it with your family,” he says, explaining that restaurant kitchens have an executive chef, some support chefs and some prep chefs. “Those jobs are broken down into levels of responsibility and technique and understanding, and you can do the exact same things with your kids if you choose age-appropriate tasks for them to do. My little one can crack eggs, and my older one is able to use a measuring cup.”

He has written this recipe to take advantage of this division of labor.

It’s also pretty flexible. “If you don’t like broccolini or broccoli rabe, you can use florets or you can use cauliflower or you could use cherry tomatoes or you could use red onion,” Tulaney says. Just put a pot of water on the stove and follow the rest of the instructions while it comes to a boil and the pasta cooks, and you’ll have dinner within half an hour.

Penne Pasta with Sausage and Broccolini from WEHO Sausage Co.

1 lemon, cut in half

Adults: Bring 4 quarts of water to a boil in a large stock pot and add a handy pinch of salt. Start this first – the trick is to finish everything else while the water is coming to a boil.

Kids: Measure out 4 cups of dry penne pasta and put it off to the side, so it is ready when the water is boiling.

Adults: Heat the olive oil in a large sauté pan (the largest one you have, as it will have to hold everything). Add the ground sausage. With a wooden spoon, break up sausage into small pieces and stir until nice and brown, about 3 to 4 minutes.

Kids: Break open a head of garlic and chose the 4 biggest cloves. The bold may even attempt to peel the garlic, discarding any skins.

Adults: When the sausage is brown, transfer it to a bowl, keeping as much of the oil (and flavor from the sausage) as possible in the pan. We will not be adding any more.

Kids: With adult supervision, add the garlic cloves to the oil in the pan. (If you like garlic a lot, an adult can chop the garlic first.) Move the garlic around with the wooden spoon until some color forms on the garlic, then drop in all of the broccolini. Add a tiny pinch of salt (since the oil is already flavored with the sausage). Carefully squeeze every last drop of juice from the lemon right on top of the broccolini and cover the pan.

Adults and kids: By this time the water should be boiling. Add the dried pasta to the water. Stir the broccolini a bit.

Serve with the Parmesan cheese.

Share this...
Don’t Miss Out On The Fun
Sign up for our ENews and be the first to know the latest on toys & family must-haves, giveaways & gift and play ideas!
Follow Us On Instagram #PlayLearnConnect
Check out our new Baby Bundle Gift Guide. Features